We have highlighted on Insider Financial several companies that will benefit from the increase in the price of cobalt caused by the growing battery market. US COBALT INC COM NPV (OTCMKTS:SCTFF) or Cobalt International Energy, Inc (NYSE: CIE) are some very good examples. Today, we bring readers a new opportunity: FIRST COBALT CORP COM NPV (OTCMKTS:FTSSF). 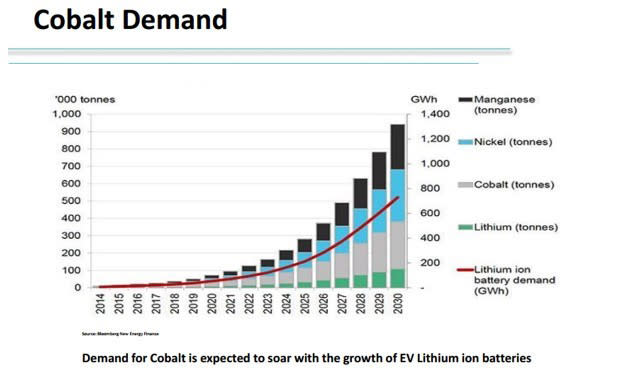 Because the company is growing at a remarkable pace. The option agreement announced on June 6, 2017, under which Cobalt One Limited (CO1.AX) and FTSSF entered into a 50-50 joint venture on the Yukon cobalt extraction refinery created a significant market reaction. But, the company put out some other initiatives also. We will discuss the most important ones in this article. First, have a look at the jump and note the volume. More than 0.7 million shares were exchanged on some days.

Like the other operators reviewed by us, FTSSF focuses on the creation of a portfolio of assets with large exposure to the cobalt market. The company owns interests in Canada and the Democratic Republic of the Congo. Here is some information in this regard:

In the beginning of June, the share price went from $0.30 to touch the level of $0.55 on strong volume. The reasons for this spike were several. The company put out seven different press releases. We believe that the most relevant was noted on June 1, 2017; the announcement of its agreement with Cobalt One Limited (CO1.AX) to enter into a 50-50 joint venture on the Yukon cobalt extraction refinery in Cobalt, Ontario. The new agreement is expected to bring access to a refinery and 40 acres of permitted property capable of processing the silver-cobalt arsenide concentrates. Additionally, it was noted that the asset acquired is quite unique as the refinery is “one of only four fully permitted facilities in Canada capable of treating this type of ore“. Trent Mell, President, & Chief Executive Officer, explained the importance of the agreement with the following words:

“The Yukon refinery and the 40 acres of permitted property can help us reduce the permitting timeline in a meaningful fashion for a future development project. We are very pleased to be partnering with Cobalt One, which was one of the first companies to identify the opportunity to revive this historic camp and is now one of the largest cobalt companies in the district.“ Source

Furthermore, another relevant acquisition was put out on June 7, 2017;  the acquisition of 22 mining claims in Cobalt Ontario, including the former producing Bellellen Mine. The transaction brings 848 hectares, increasing the Company’s footprint by 40% to a total of almost 3,000 hectares of this prolific camp. Trent Mell also celebrated the news using the following words:

“This transaction increases our land position in an important mining camp and also achieves two objectives. First, it allows us to test for extensions of the Keeley-Frontier mine to the east of our previous property boundary. Second, we now have a meaningful land position at the north end of the camp, adjacent to Agnico Eagle’s properties.“ Source

Other news put out, but less interesting, were the result of the company’s private placement, wherein it was noted that the company issued a total of 2,050,001 flow-through common shares at a price of $0.60 per Flow-Through Share for gross proceeds of $1,230,000. Additionally, the option grant given to directors to purchase an aggregate of 1,400,000 common shares of First Cobalt exercisable at a price of C$0.69 for a period of sixty months.

FTSSF is growing by acquiring new agreements with other miners. The chances of obtaining higher cobalt production in the future is therefore higher. On the top of it, we saw that the company already obtained permits to operate in Canada and Congo, which shows that the company has been operating for a while in the Cobalt market and seems to be ready to produce soon. Market participants need to check from time to time the dilution risk created by new capital increases, but the general outlook of the company seems positive. It seems that the growth will offset the potential dilution. To sum, be alert on this name. We will be updating our subscribers as soon as we know more. For the latest updates on FTSSF, sign up below!

Disclosure: We have no position in FTSSF and have not been compensated for this article.

Click to comment
Here’s What CTI BioPharma Corp (NASDAQ:CTIC) Needs To Get Out Of Its Cash To Justify The Raise
BAGGERS DAVES BURG COM USD0.0001 (OTCMKTS:BDVB) Is Today’s Stock Focus
To Top