JB & ZJMY Holding Company Inc (OTCMKTS:JBZY) is ticking down after a long period of consolidation. Market sentiment on the stock has weakened after two months without new information on the merger with a China-based battery manufacturer. In our view, the market was expecting good news after the change in the name and ticker. But, JBZY, unfortunately, did not release new info.

It shows a different picture. Recent price action suggests that the stock could rebound, as the trading volume has increased significantly. With trading volumes having surged above the 10 million mark, the stock needs to close above the $0.020 mark to affirm the rebound. In our opinion, only one press release would make longs get in the stock again. The upside is large. If new information is revealed, the stock could try to hit the resistance of the $0.05 mark.

On the downside, the stock price could go to test the support of $0.01. Many longs will be waiting at this price to re-enter orders. Thus, it will be another good price to buy the dip. But, be careful; if the support does not resist, the price could collapse.

Let’s catch up a little with JBZY for the starters. The entity was founded under the laws of Nevada on April 18, 2006. But, the business operations are carried on in Beijing, China. It focuses on the business of electric cars and their support systems. Currently, JBZY  plans to launch two types of cars to the market; the electric car with a max range of 330 Kms, and an electrical SUV model with a max range of 500 km.

Why is the company investing in China?

This decision was smart. According to Bloomberg, the Chinese electric vehicle market (“EV”) became the largest market in the world in 2015.  As many as 507,000 cars were sold. Additionally, this strong tendency is expected to continue. Experts are foreseeing sales equal to 2 million by 2020. Have a look at the following chart: 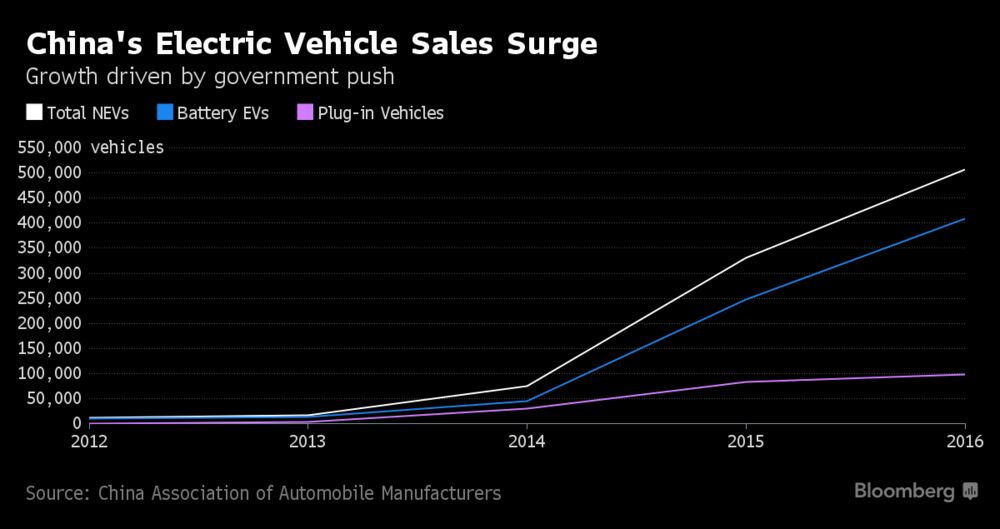 What’s creating this high demand for EVs? The Chinese Government is betting very strong on this new technology. According to Yale Zhang of Auto Foresight, a Shanghai consultancy specializing in the car industry, the buyers of EV received subsidies worth $15,000 per vehicle in 2016. In our opinion, absolutely nothing will be able to stop the Chinese Government if it is willing to develop this market. It is, therefore, a great business initiative for the company as well as the shareholders.

That’s the next critical point to look at. First of all, we are not fully qualified to assess the technological know-how owned by JBZY. With that in mind, it is worth mentioning that JBZY owns several patents. Furthermore, the products line consists of two different EV models:

The most significant catalyst: the reverse merger

JBZY seems to have outstanding upside potential. The EV market is exploding up in China as well as the United States. Furthermore, the patents and the models show that the company is well positioned to profit from the future growth of the industry. However, until very recently, holding the shares of the company was quite risky. The assets are in China, thus the American holders needed an entity in the US.

This company is solving this issue by acquiring a publicly listed company in the US. It is brilliant. Thanks to this transaction, the holders can own American securities with rights on the assets of JBZY. Regarding this transaction, we found a large number of documents that readers should consult. An extensive due diligence has been made in the iHub forum. Have a look at it here. In our opinion, the most critical is the following one. We will not bother readers with more legal matters: Additionally, following factors are very important for the merger and the stock performance. On October 20, 2017, FINRA approved the change of the company’s stock ticker to JBZY. Furthermore, with effect from Wednesday, October 24, 2017, the ticker change was official. As a result of this change, the market pushed up the stock. Shareholders tripled their money in only one day and many were quite surprised by JBZY.

What happened to the stock price after the release of this news?

That’s the million dollar question. In our view, shareholders tried to profit from the explosive market move and pushed down the share price. It declined rapidly in January and February to the current level without a particular reason. The most interesting is that JBZY did not release new information, so the company is still the same. It seems a buy-the-dip opportunity from here.

What matters to us? The financial situation is quite balanced

We care about finance here, but not the law. Thus, we will be looking at what matters the most to the market; the number of assets, and debt in the financial accounts. This is quite beneficial on JBZY, and we did not see people really remarking this fact. It is not only that as of September 30, 2017, the total amount of assets was equal to $4.1 million, but the total amount of assets increased more than 400% in the last year. Furthermore, the amount of liabilities is only $1.1 million. Hence, JBZY seems well prepared to keep the innovations running.

Currently trading with a market cap of $16 million, JBZY is an exciting story among small caps. With $0.18 million in revenues in the fiscal year 2016 and a year-over-year revenue growth rate of more than 200%, the company is poised to surprise.

To sum up, be ready to assess new press releases; there is upside potential if good news arrives.

We will be updating our subscribers as soon as we know more. For the latest updates on JBZY, sign up below!

Disclosure: We have no position in JBZY and have not been compensated for this article.

Click to comment
Firefish Inc (OTCMKTS:FRFS) Keeps Delivering Gains
Ascent Solar Technologies, Inc. (OTCMKTS:ASTI) Is Down, But Not Out
To Top