Today, we are bringing a new cryptocurrency with unique features for those looking for privacy. We are talking about Monero, an open-source coin created in 2014, which focuses on private and censorship-resistant transactions.

Unlike Bitcoin, Monero uses the CryptoNote protocol, which is a current algorithm completely different from that of Bitcoin; blockchain. The main difference is that every unit of Monero can be substituted by another unit. They are all fungible and indistinguishable from one another.

This unique system seems to be interesting to the cryptocurrency market participants who have pushed Monero’s price from close to $0 to $196 in less than two years.

But, that’s not the most remarkable.

What a few will note is that its use seems to be growing, as the volume registered in the exchange has grown much during the last month.

More than 160 million coins have changed hands some days recently.

Chart for Monero from https://coinmarketcap.com/currencies/monero/

Check the following video. It shows who is interested in using this coin and how privacy can help individuals and businesses protect their activities:

Bitcoin, Ethereum and most cryptocurrencies are based on transparent blockchains, which means that the transactions are traceable by anyone in the world. The sender of bitcoins and the receiver are potentially linked to a person’s real-world identity.

In contrast, Monero “obfuscates sending and receiving addresses as well as transacted amounts.” It seems to be the key of its success. With this system, there is no risk of government intervention and the transfer of wealth can be executed with freedom.

The team in charge of this coin knows quite a bit about encrypt transactions. They are also involved in the Kovri Project, which uses end-to-end encryption to hide the IP address of the two parties involved in transactions. The technology is not new; the darknet, i2p (Invisible Internet Protocol), uses similar systems.

Monero utilizes ring signatures to hide the transaction outputs and hides the receiving address of the transaction. Additionally, RingCT is in charge of hiding the amount that is being transferred.

Additionally, Monero uses “spend key” and “view key” to allow individuals enable transparent transactions between them. As medio.com notes, there are situations, in which transparency is interesting for auditing an individual or for tax purposes. We appreciate that it is the owner of the coin who is in charge of choosing this option. The system does not force individuals to show their identity as it happens with Bitcoin. Well done.

The first thing to note regarding how users are gaining access to Monero is that no sale of any token was executed. The Monero’s website noted that no presale of any kind was organized. Everything seems to be very organic, which we appreciate. It shows that the new coin is serious.

How long does it take to mine?

It is said that the block time is 2 minutes, but this feature may increase in the future.

It is expected that there will be ~18.132 million coins by the end of May 2022. Then the mining will be reduced and inflation will be lower than 1%. Hence, the money supply will increase infinitely as shown in the following chart. Have a look: 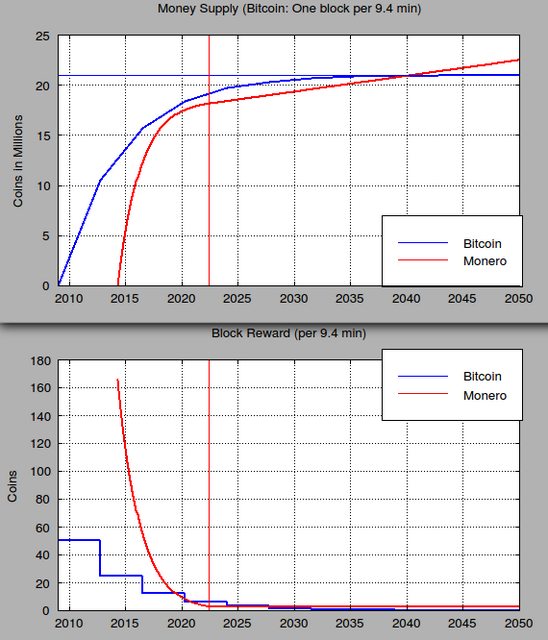 Bitcoin and Monero – Comparison of Money Supply and Block Reward

Another big difference as compared to Bitcoin is that the production of Monero will never stop. This means that little inflation will always exist, which, in our opinion, is good. When inflation does not exist, coin holders prefer to not reinvest the money or not to mine, consequently transactions don’t grow. In economics, this event is called deflation, which happens when inflation goes below 0%. It is very bad for periods of recession.

We believe that the increase in the price of each coin and the growing revenue prove that more and more people are using this new cryptocurrency.

We could find a big community of Monero miners and coin holders, which shows that the coin is becoming more and more accepted.

In addition, on November 28, 2017, it was announced in this press release that a new website Moneo.io is being launched and a large amount of programmers want to join the community. It was said that “more than 400 clients have posted $8m of blockchain projects and over 1,500 freelancers have applied to join.”

We believe that it is another proof to show that companies believe in the project. This will affect the future price of Monero, as demand is being pushed up.

Currently trading with a market cap of $3 billion, Monero is an exciting story among cryptocurrencies. We believe that coin holders will be first interested in the fantastic returns that this new cryptocurrency is delivering, but we also believe that the privacy features will also draw their attention.

We encourage readers to be very alert on Monero, as we expect more news from their founders. Additionally, if demand continues to pick up, the price will follow and new returns could be delivered.

To sum up, there is a lot to like in Monero.

We will be updating our subscribers as soon as we know more. For the latest updates on Monero, sign up below!

Click to comment
Tactical Services Inc (OTCMKTS:TTSI) Is The Latest Drone Play To Hit The Market
Mercury (MER) Is Running: Pump And Dump Or Real-World Play?
To Top