It was another tough week for U.S. OTC stocks, although the Nasdaq managed to snap its 4-week losing streak.
Friday’s flurry of economic data…

It was another tough week for U.S. OTC stocks, although the Nasdaq managed to snap its 4-week losing streak.

Friday’s flurry of economic data releases turned out to be a mixed bag.  This kept the markets in check on a typical low magnitude Friday. U.S. factory and services activity reports were positive. The average selling price of homes came in at a record high although existing home sales fell 2.7% in April. Earnings reports from retailers were mostly positive.

With earnings season winding down, the markets will have macroeconomic news back in focus. On Friday, Philadelphia Fed Bank President Patrick Harker said that Fed officials talked about reducing asset purchases “sooner rather than later”. Currently, the central bank is making asset purchases of $120 billion a month.

With the economic recovery progressing well and inflation creeping up, pressure is mounting for the Fed to peel back some of its economic support to avoid an overheated situation. Meanwhile, the Fed has maintained that inflation is “transitory” although language from the recent FOMC meeting indicated some chatter about raising rates.

Over in the OTC markets, it was a relatively flat week for the OTCQX Composite. It did, however, finish the week on a good note and appears to have a return to the 1,600 levels in its sights.

Speaking of finishing the week on a high note, let’s take a look at some OTC stocks to watch this week that have built up solid momentum.

AABB, ABML, and HCMC will ring a bell for regular Insider Financial readers. These three names have been featured before. PHBI, on the other hand, was all the rage on social media Friday—and is our bonus selection. Enjoy!

We first wrote about the stock on February 17th as the cryptocurrency play was preparing to launch its AABB Gold Token. That article can be found here.

After a sharp selloff, AABB got a second wind after the company said the token would continue to be fully backed by physical gold attained from mining production and gold purchases. We discussed that development in this article.

AABB nearly went on a third big run in late April when it provided an update on its plan to acquire a historic gold mine property in Jalisco, Mexico. We discussed that story here.

On Tuesday, the company released first-quarter results that got investors buzzing about the unique crypto boom play.

We learned that AABB has more than $100 million in assets which puts it in a good position to fund growth opportunities on its own. It has multiple growth levers in the form of gold mining, crypto sales, and its crypto exchange business.

A week before the first-quarter report, AABB offered an update on its proprietary crypto platform. It noted several development milestones had been reached just a month into the build. The exchange will allow AABB Wallet users to exchange AABB Gold (AABBG) tokens for major cryptocurrencies like Bitcoin and Ethereum. It is expected to boost the company’s revenues and allow AABBG to appreciate due to strong market demand and limited token supply.

AABB is planning to test the exchange in mid-August and launch it in early September. It shared a screenshot of the technology seen below: 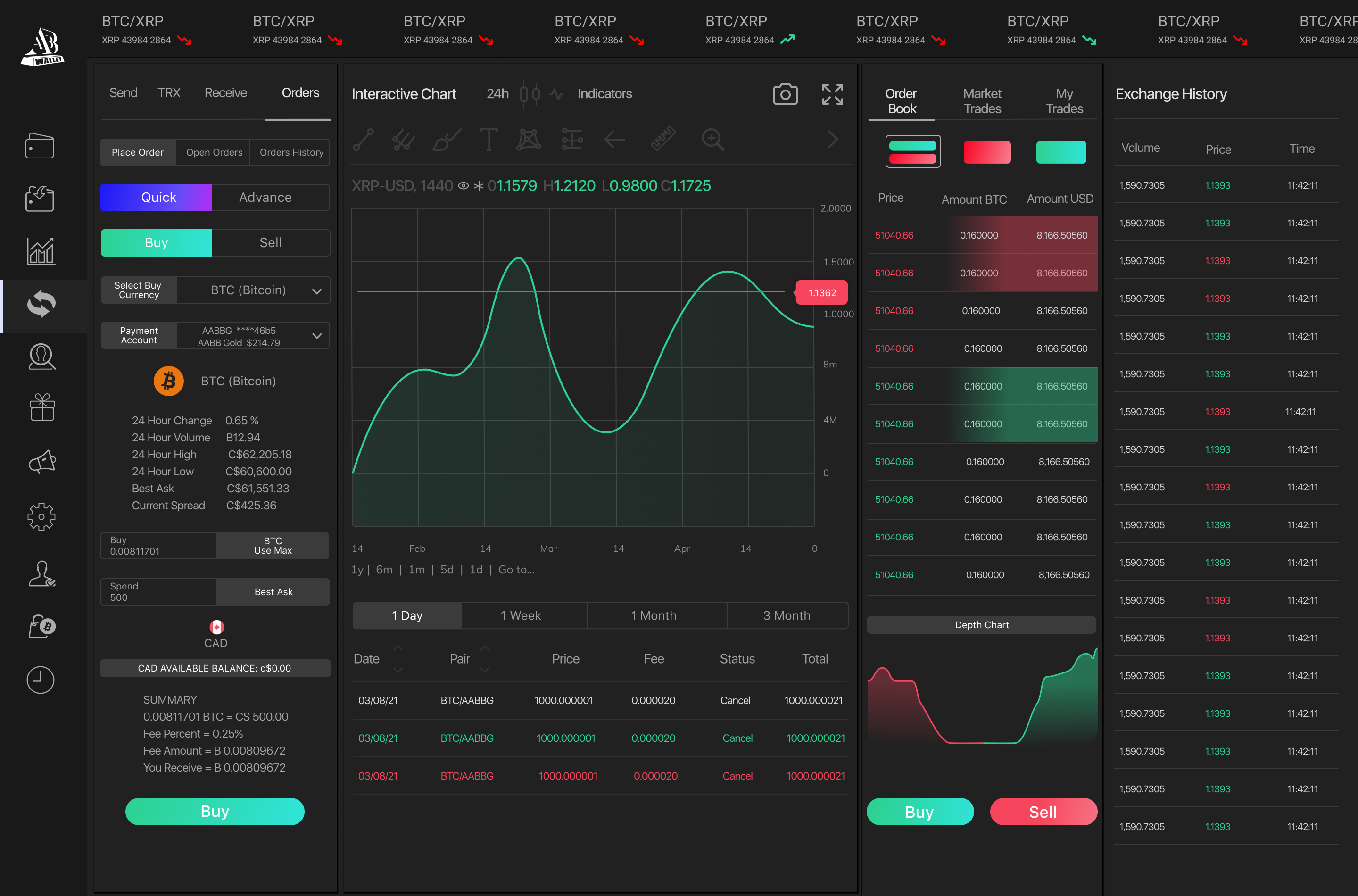 In reference to its gold mining project ambitions, AABB said “management is thrilled with the projects’ potential for rapid development, high production, and low operating costs”. It also noted that it plans to acquire gold mines and properties “in the near future” after drill testing and other due diligence is performed.

The market was equally thrilled with last week’s update. With the exchange due to go live in a matter of months and mine acquisition news possibly not far off, AABB could have the wind at its back in the second half of the year.

We’ve been writing about ABML for over a year now. Our initial feature story on the battery metal company can be found here.

As we first reported on ABML when it was trading at $0.06, Insider Financial subscribers are sitting on an incredible 35-bagger right now!

In our most recent ABML update, we suggested an epic short squeeze is in the works prompted by the opening of the lithium battery recycling pilot plant in Fernley, Nevada. Based on what we saw on Thursday and Friday, the squeeze stage could be set.

Although last week’s news wasn’t related to the Fernley plant, it was still pretty darn good.

On Thursday, ABML filed an application to list on the Nasdaq exchange. While approval isn’t a certainty, the company said it plans to satisfy all listing requirements. Investors were satisfied with this news as they bid up ABML by nearly 40% over the week’s last two trading days.

Chairman and CEO Doug Cole commented, “We believe listing our common stock on the NASDAQ will improve liquidity, increase our corporate visibility in the financial markets, and create shareholder value.”

ABML is in the process of changing its name from American Battery Metals Corporation to American Battery Technology Company. This is designed to highlight its lithium-ion battery recycling technology which is its key differentiator in the space.

Whatever its called, investors should call it a continual winner.

A week prior to the Nasdaq application news, ABML received approval for a Conditional Use Permit (CUP) for the Fernley plan. This is just step one in the process but a good one. Next, the application goes to the Fernley City Council for final approval.

We continue to approve of ABML’s prospects as an electric vehicle (EV) battery play in addition to its opportunities in grid storage and consumer electronics. This stock certainly has the power to run higher in the coming months.

HCMC has been one of our favorite OTC penny stocks this year. We first noted the momentum at the beginning of February. That story can be found here.

The stock has primarily been a lawsuit play related to HCMC’s patent infringement suit against Phillip Morris. It involves their IQOS alternative tobacco product that is marketed and sold by the tobacco giant.

While the legal process drags on, HCMC has more recently been embraced by the market for the company’s re-launch of TheVitaminStore.com. It initially acquired the asset in its takeover of three Paradise Health & Nutrition stores in Florida. The Paradise stores sell vitamins, groceries, personal care items, and household products through the Healthy Choice Markets subsidiary.

Now a double threat lawsuit and health and wellness trend play, HCMC has attracted a whole different set of investors this year. The fact that the stock is up 1,500% year-to-date hasn’t hurt either.

Since we last checked in on HCMC, the company reported first-quarter results. Revenue fell 14% to $3.5 million and it recorded a $766k net loss. The revenue decline largely tied to a tough comparison to the prior-year period when COVID-19 spurred stockpiling demand in the grocery channel.

A silver lining was a 9% increase in EBITDA to $394k. This showed that cost reduction efforts have gained traction and operating efficiency has improved. Operating expenses were down 15% in the quarter.

The quarterly report was followed by a brief HCMC rally. More importantly, after the stock spiked above $0.003 on the website re-launch news, it has retreated to the 50-day moving average line in low volume. In fact, not a single trading day since the spike has been in above-average volume.

With HCMC now finding support at its long-term trend line and advancing in three of the last four days, the pullback may be a chance for investors to load back up.

PHBI is making its Insider Financial debut. It skyrocketed more than 150% on Friday in more than 11x the 90-day average trading volume.

Taking a step back, PHBI is a Nevada-based biotech company focused on tissue culture technology. This involves the technique of removing pieces or organs from a plant and culturing them for nutritional or medicinal purposes. It combines tissue culture science with its proprietary Chibafreen in vitro plant process to produce 100% germ-free, disease-free, and genetically identical hemp plantlets.

Yes, this is a fancy way of saying PHBI is another cannabis play—but an interesting one. It extracts CBD hemp oil and provides related laboratory services to the North American hemp and agriculture sectors.

The company’s main goal is to become a leading producer of hemp starter plantlets used for organic hemp farming. It is in the process of building its facilities in the U.S. which is expected to take about 16 months. Once in full swing, the so-called Botany Biotech Complex, a 63,000 square foot greenhouse, is expected to generate significant revenue.

So, why did PHBI suddenly surge on Friday?

Outside of a press release earlier in the week about the company’s upcoming appearance on FMW Media’s “New to the Street” TV show, there wasn’t any official news.

Instead, Stocktwits and other social media circles were buzzing that someone knows something going on behind the scenes. A 20 million purchase made by one person or entity garnered particular attention.

As PHBI caught fire on social platforms, the big money continued to roll in. The stock got stronger as the day wore on. Following a mid-afternoon nap, it finished not far from its $0.06 peak. Not bad for a stock that started the day around $0.02.

Our two cents is that the run isn’t over here. Some on iHub are speculating that PHBI gaps higher at the Monday open. Who knows if that will be the case. All we know is that this is suddenly one hot cannabis play.

As we keep saying, there are always opportunities in the markets and it’s our job to find winning OTC stocks for our subscribers. Huge gains can be made in such a short amount of time.

If you like any of these 4 OTC stocks to watch this week, our best advice is to be patient and throw bids in below the market. Buying dips and selling rips as swing trades remains the best strategy.

It’s also important to look for OTC stocks that have yet to run. There are plenty of opportunities out there and we screen hundreds of penny stocks each week looking for the best alerts for our subscribers.

Image by Thanks for your Like • donations welcome from Pixabay