The tokens are backed by 100% real gold

Over $1 million sold in the first two weeks of launch

We have another exciting profile for today’s session that could not be ignored.

Were you paying attention to the last one?

It hit high of .70 on the session after closing at .48 the night before.

This next one is sitting at just .06 with a massive following and strong potential for a squeeze if the company received the right amount of attention from the street.

Asia Broadband Inc. (OTC: AABB) is a resource company focused on the production, supply and sale of precious and base metals, primarily to Asian markets. The Company utilizes its specific geographic expertise, experience and extensive industry contacts to facilitate its innovative distribution process from the production and supply of precious and base metals in Mexico to client sales networks in Asia. This vertical integration approach to sales transactions is the unique strength of AABB that differentiates the Company and creates distinctive value for shareholders. Additionally, the Company has added a digital assets business segment and released its AABBG freshly minted mine-to-token gold-backed cryptocurrency within its AABB Wallet and a proprietary digital exchange AABBExchange. AABB expects its token to become a world-wide standard of exchange that is stable, secured and trusted with gold backing, while having the added benefit of demand based price appreciation. These are unique and outstanding qualities relative to other cryptocurrencies.

LAS VEGAS, July 27, 2022 (GLOBE NEWSWIRE) — Asia Broadband Inc. (OTC: AABB) (“AABB” or the “Company”) is pleased to announce that the Company has reinstalled the Convert feature within the AABB Wallet to allow users to purchase AABBG gold-backed tokens in exchange for other cryptocurrencies. The Convert feature was temporarily disabled several months ago to facilitate the further development of the Company’s AABB Exchange.

The launch of the Company’s AABB Wallet in 2021 introduced its AABBG token’s initial release to the market that is backed by $30 million in physical gold the Company currently holds. Any future token releases will continue to be backed 100% by additional physical gold acquired from the Company’s future mining production, gold purchased from cash reserves or credit. At today’s market price of gold, the one-tenth (0.1) gram of gold backing the AABBG token price is approximately $5.50 USD. The token price is tied to and supported by the Company at the market price of gold at a minimum. As the price of gold fluctuates, the minimum supported price of the AABBG token will increase or decrease. However, the potential upside price of AABBG will be driven by market demand.

Through the AABBG token and AABB Exchange, the Company embraces a pioneering philosophy with its truly unique Mine-to-Token vertical integration operational approach that strives toward complete independence from FIAT currency.

In other news, the highly anticipated launch of the Company’s online payment processing solution PayAABB is expected in the coming weeks.

We like what we see here.  It is sitting at the lower end of it’s recently established ranged and has gone on to make significant moves on interest from around where it is currently trading right now.

LAS VEGAS, July 19, 2022 (GLOBE NEWSWIRE) — Asia Broadband Inc. (OTC: AABB) (“AABB” or the “Company”) is pleased to announce that the Company has received the completed and certified geological technical report prepared by a qualified professional person (QP) for its Bonanza Gold Mine Project located the Acaponeta area of Nayarit, Mexico. The mineral resource estimates of gold and silver values contained in this initial report exceed $10 million at the current spot precious metal prices. The AABB geological and mining operations team will utilize the report to maximize its exploration, development and resource expansion program, as well as facilitate production, efficiencies and processing equipment installations. The Bonanza gold project is a prospective high yield mining asset in the Company’s strategic initiative to increase gold production and AABB’s physical gold holdings.

Located in the prolific mining region of Acaponeta in Nayarit, Mexico, the Bonanza property has shown high-grade gold assay results from recent samples and drilling activities with the most significant gold values of more than 10 grams per ton (g/t). Company management is excited by the Bonanza project for its potential for rapid expansion, high production, low operating costs and strong contribution to gross profits.

“The Company’s management group and mining team are absolutely thrilled with having the certified resource report in our hands for our Bonanza gold project. This initial detailed assessment is the guide that allows us to accelerate our expansion and development plans for the property,” expressed Chris Torres, AABB President and CEO.

AABB continues to implement its mining property acquisition strategy to optimize development capital utilization by focusing operations in regions of Mexico where AABB has a comparative advantage of development resources and expertise readily available for rapid expansion and duplication of the Company’s previous gold production success.

AABB continues to advance the corporate initiative to reward its loyal shareholder base for their patience, continued support and interest in sharing the success and growth of the Company’s gold mining operations and digital asset division. 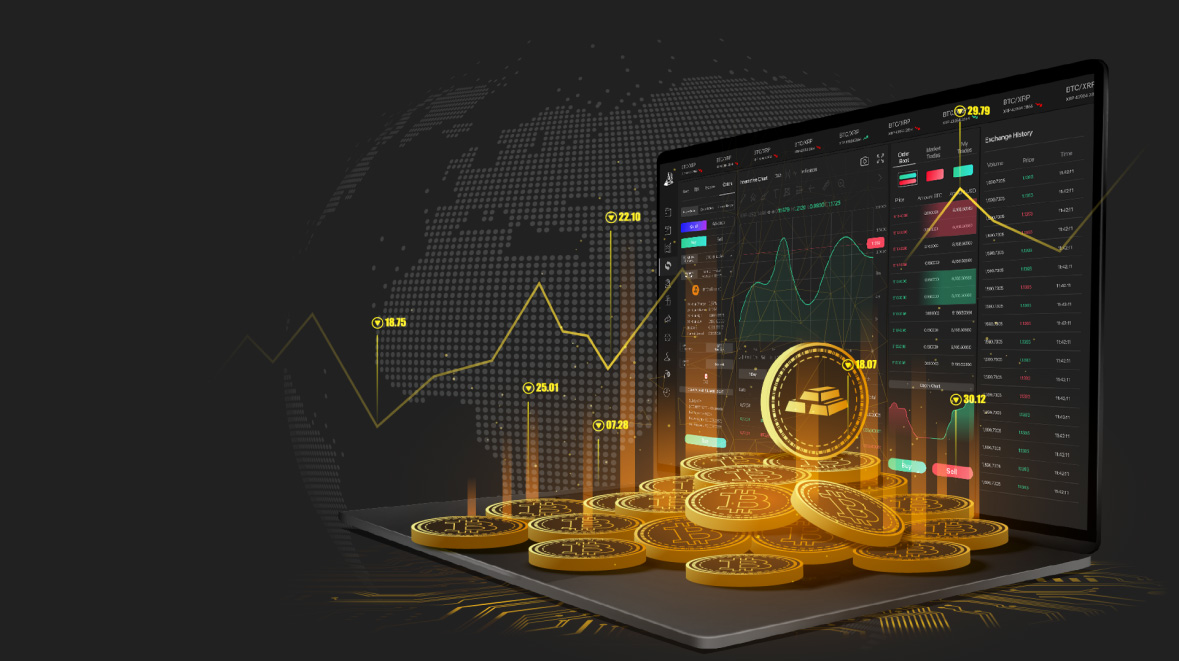 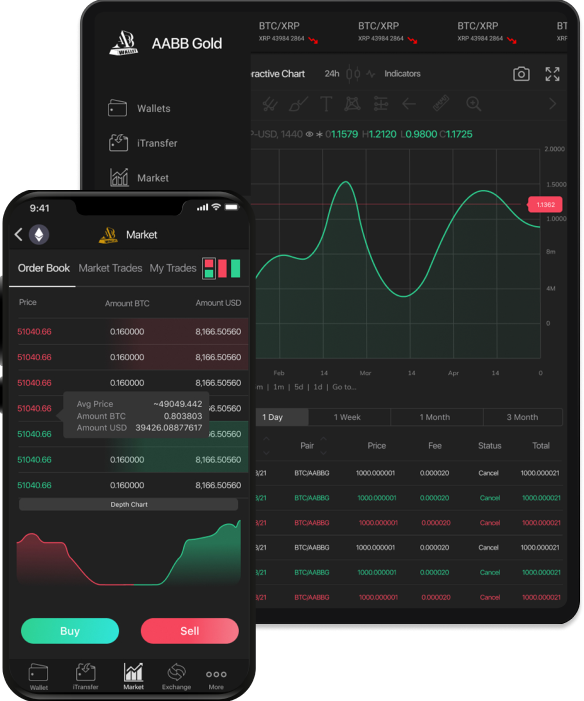 Trade, Deposit and Store Crypto with our AABB Wallet App
Protect your cryptocurrency in our secure, easy-to-use, multi-currency AABB Wallet.

Complete Privacy.
No data is collected, and transactions are 100% invisible to third parties.

No deposit fees. Low transaction fees for  crypto-to-crypto, and withdrawal.

Use iTransfer.
Send AABB Gold and other crypto securely by email, SMS or social media. All transactions are private. 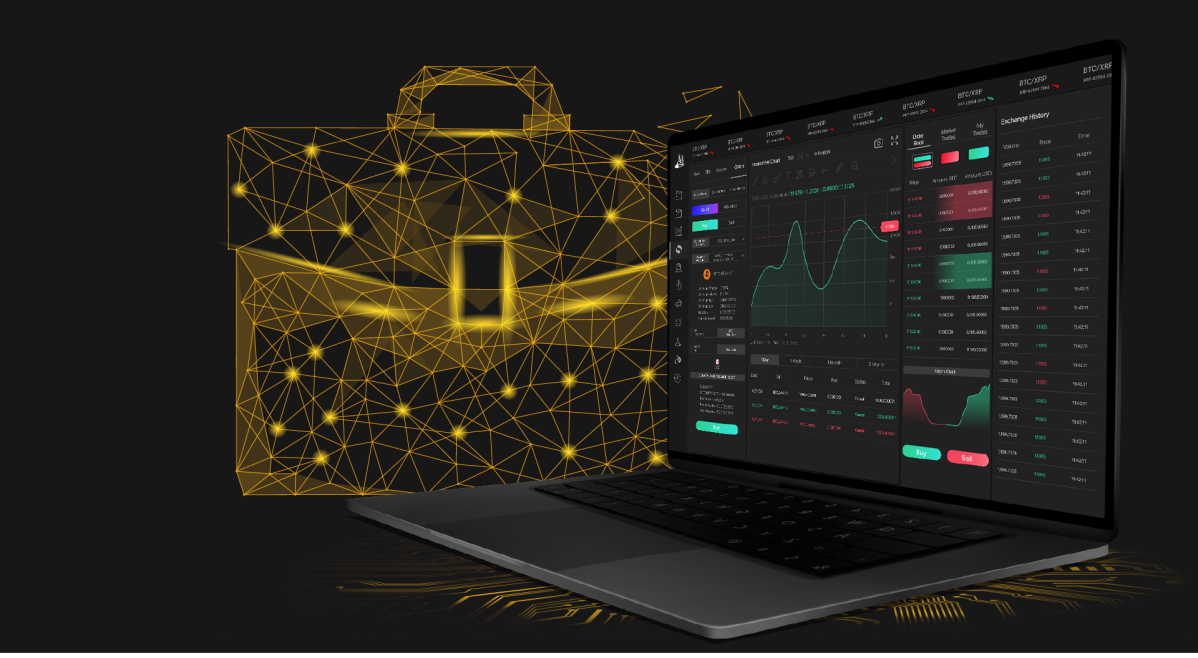 Save Money
Maximize your profit with the most competitive transaction fees in the industry. No deposit fees!

Precious metals have long provided a haven for investors. Such assets experience consistent demand and have a proven track record of maintaining their value through periods of inflation. By linking the price of a cryptocurrency to gold or silver, investors enjoy the best of both worlds — from the reliability of precious metal investments to the flexibility, scarcity, and upside potential of cryptocurrency.

The minimum token price is linked to the current spot price of gold, which means the token benefits from the lower volatility of gold relative to the cryptocurrency space, offering a sense of stability. Given fears of devalued fiat currencies, the bull case for gold remains intact, and AABBG could also rise as a function of increasing gold prices.

Unlike other gold-backed cryptos, AABB holds physical gold assets that back the AABBG token 100% from the mining production segment of its holding company. The vertically integrated Mine-To-Token concept is a one of its kind product.

AABB continues to implement its mining property acquisition strategy to increase development capital utilization by focusing operations on regions of Mexico. In these regions, AABB has a comparative advantage of development resources and expertise readily available for the rapid expansion and doubling of the Company’s previous gold production success.

Gold at Your Fingertips AABBG is tied to 0.1 gram of gold price

The tokens are backed by 100% real gold

Over $1 million sold in the first two weeks of launch

Backed by $30 million in physical gold

Developed on the Ethereum blockchain 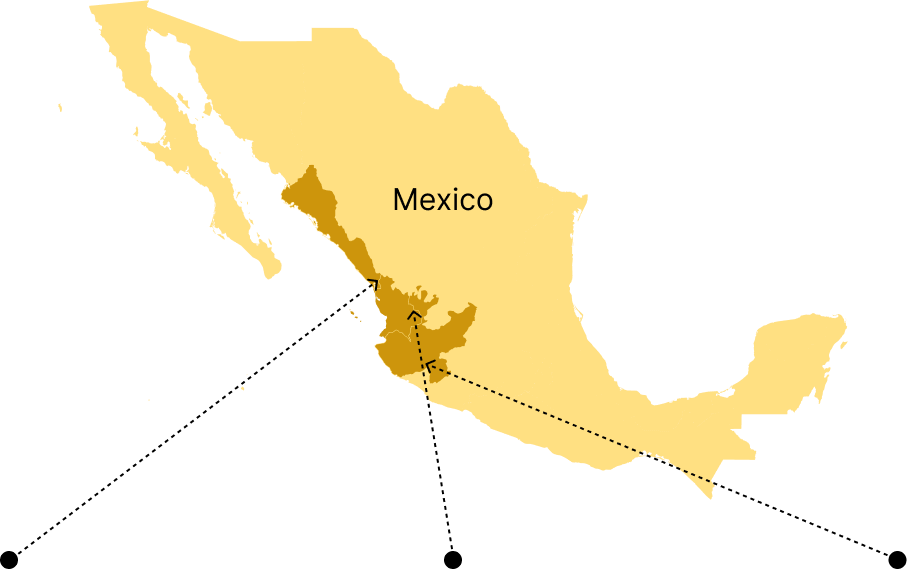 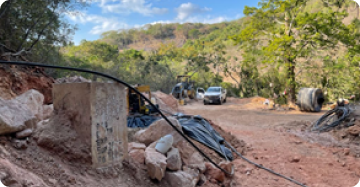 This website/newsletter is a wholly owned subsidiary of One22 Media, LLC, herein referred to as O22, LLC

Our reports/releases are a commercial advertisement and are for general information purposes ONLY. We are engaged in the business of marketing and advertising companies for monetary compensation.  We have been compensated a fee of thirty thousand usd by a third party, Legends Media, llc for a 1 day AABB awareness campaign.  Never invest in any stock featured on our site or emails unless you can afford to lose your entire investment. The disclaimer is to be read and fully understood before using our services, joining our site or our email/blog list as well as any social networking platforms we may use.PLEASE NOTE WELL: O22 LLC and its employees are not a Registered Investment Advisor, Broker Dealer or a member of any association for other research providers in any jurisdiction whatsoever.Release of Liability: Through use of this website viewing or using you agree to hold O22, LLC, its operators owners and employees harmless and to completely release them from any and all liability due to any and all loss (monetary or otherwise), damage (monetary or otherwise), or injury (monetary or otherwise) that you may incur. The information contained herein is based on sources which we believe to be reliable but is not guaranteed by us as being accurate and does not purport to be a complete statement or summary of the available data. O22 LLC encourages readers and investors to supplement the information in these reports with independent research and other professional advice. All information on featured companies is provided by the companies profiled, or is available from public sources and O22, LLC makes no representations, warranties or guarantees as to the accuracy or completeness of the disclosure by the profiled companies. None of the materials or advertisements herein constitute offers or solicitations to purchase or sell securities of the companies profiled herein and any decision to invest in any such company or other financial decisions should not be made based upon the information provided herein. Instead O22, LLC strongly urges you conduct a complete and independent investigation of the respective companies and consideration of all pertinent risks. Readers are advised to review SEC periodic reports: Forms 10-Q, 10K, Form 8-K, insider reports, Forms 3, 4, 5 Schedule 13D.O22, LLC is compliant with the Can Spam Act of 2003. O22, LLC does not offer such advice or analysis, andO22, LLC further urges you to consult your own independent tax, business, financial and investment advisors. Investing in micro-cap and growth securities is highly speculative and carries and extremely high degree of risk. It is possible that an investors investment may be lost or impaired due to the speculative nature of the companies profiled.The Private Securities Litigation Reform Act of 1995 provides investors a safe harbor in regard to forward-looking statements. Any statements that express or involve discussions with respect to predictions, expectations, beliefs, plans, projections, objectives, goals, assumptions or future events or performance are not statements of historical fact may be forward looking statements. Forward looking statements are based on expectations, estimates, and projections at the time the statements are made that involve a number of risks and uncertainties which could cause actual results or events to differ materially from those presently anticipated. Forward looking statements in this action may be identified through use of words such as projects, foresee, expects, will, anticipates, estimates, believes, understands, or that by statements indicating certain actions & quote; may, could, or might occur. Understand there is no guarantee past performance will be indicative of future results.In preparing this publication,O22, LLC has relied upon information supplied by its customers, publicly available information and press releases which it believes to be reliable; however, such reliability cannot be guaranteed. Investors should not rely on the information contained in this website. Rather, investors should use the information contained in this website as a starting point for doing additional independent research on the featured companies.  The advertisements in this website are believed to be reliable, however, O22, LLC and its owners, affiliates, subsidiaries, officers, directors, representatives and agents disclaim any liability as to the completeness or accuracy of the information contained in any advertisement and for any omissions of materials facts from such advertisement. O22, LLC is not responsible for any claims made by the companies advertised herein, nor is O22, LLC responsible for any other promotional firm, its program or its structure. 022, LLC is not affiliated with any exchange, electronic quotation system, the Securities Exchange Commission or FINRA.